Our fall season has had some ups and downs. There have been some incredibly joyous moments and some moments where we’ve both felt really discouraged. Therefore this fall felt a little different than the last one. We’d usually be running around our go-to orchard or going on a lot of fall excursions. I usually decorate our home for fall. This year though, when we weren’t traveling for weddings, we were home or simply trying to make it to the next moment as we’ve had some rough moments.

However, as November drew to a close, we both decided that we would try to enjoy what was left of fall. We’d spend some time outside before the season officially comes to a close and before it’s too cold to really enjoy much of anything outdoors. We’d bundle up if we needed to, but we’d venture to the beach and go on walks through tree-lined neighborhoods, admiring the fallen leaves and changing colors.

Here are some snapshots of some of what we did.

WENT TO THE BEACH

As crazy as this sounds, we went to the beach. We didn’t stay there long, but there’s something so soothing and calming about the ocean that we’ve found ourselves venturing down the shore a lot just to look at the water. Bless my husband, who’s always up for a mini-road trip, because the beach is about 1 ½ almost 2 hours depending on which beach from where we live. He’d drive that distance even just for a few minutes of looking at the ocean because I wanted to. Truly a gem.

WE WENT ON FALL DRIVES

We missed leaf-peeping this year, but we did end up spending some time going on some short walks and drives to see the foliage. We’d stop to take pictures of each other and of the foliage, admiring the colors of the leaves.

Hamilton was a big deal for us considering we haven’t been to a show since before the pandemic began. It was nice to get out of the house, enjoy one of my favorite shows that I’ve never gotten the chance to see live (only through Disney+), and cross off an item we’d been hoping to cross off for a while.

CELEBRATE OUR ANNIVERSARY AT LE CAVALIER

We had dinner for the first time in a very long time with just the two of us since the pandemic. This was my husband’s idea because he thought it would be nice for us to get out for our anniversary and spend time trying a restaurant we both have been wanting to try. It’s also probably the priciest meal we’ve had in a very, very long time, but we figured for the occasion it was worth it.

SPENT TIME TRICK-OR-TREATING WITH OUR NEPHEW

It’s always a joy getting to spend time with family and this time was no different. It was so exciting seeing how excited he was about trick-or-treating now that he’s at the age where he understands what it is. It was so precious and definitely a highlight in the last few weeks. As you know, we do not share photographs of him on our public spaces, so here’s me on the same day dressed as an undercover ninja turtle.

One of Han’s best friends got married recently, so we went down south to celebrate their nuptials. It was really nice getting to see them since it’s been over two years since we last have. Before. the wedding, since my husband was one of the groomsmen in it, we got Korean BBQ the day before after the rehearsal and it was so good!

Although we order from here quite a lot, we typically resort to doing pickup orders rather than going inside of the cafe to order. Recently we felt comfortable heading inside of the cafe to place our order instead. I know it’s not a big deal to most, but it felt good being back inside after almost two years of doing mostly pickup orders. While we will more than likely stick with pickup orders, for the time being, it was nice seeing some new and familiar baristas that I haven’t seen in a while.

We were so impressed with our meal that we find ourselves heading back there again for breakfast. While we usually try not to eat out much, it was nice to spend some time checking in with each other, connecting, and laughing over a delicious meal. Also, the breakfast was just as delicious as the dinner. We could definitely see ourselves coming back here for a date night in the future or with family or friends.

What are some things you’re all up to? 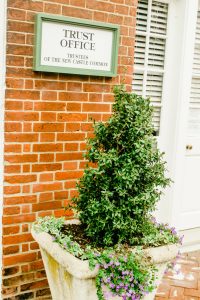 Our Holiday Page is Live on the Blog!
It’s crazy thinking about the fact that just that quickly…