Film photography has been becoming increasingly popular over the last few years. While film photography has always been beautiful, now you’re finding that more people are using them to take everyday photographs similar to how photographs used to be taken before DSLRs hit the scene. I hear more people talking now about how they need to head to the film store to buy new film or get their film developed. It’s really cool to see how as old trends are coming back, so is the art of film photography.

However, film cameras, especially the nicer ones, can be a bit pricey. Even if you save by buying a reusable camera that’s under $50 such as Kodak, the film you’ll need to take film photography can add up very quickly – especially if you aren’t used to knowing how to take photos on a film camera.

I’ve been playing around a lot with presets the last several months that I created to mimic the look of film presets, but I thought it would be helpful to share some of my tips for how you can get the film look using a DSLR camera. I am no expert, but these are things that I’ve found to be helpful when taking photographs and editing them using our presets.

I don’t know about you, but it’s usually rare that I use the flash on my DSLR camera. I might use it if I’m indoors in a dark setting or in certain outdoor settings if I want to cast certain shadows on things or if I want a crisp look, but typically I don’t. However, when looking to achieve the film look, I’ve noticed that my photographs look more reminiscent of the photographs I used to take on disposable cameras as a kid when I add the flash. In the photo above this one, you can kind of see what I mean. I’d recommend using the flash whether you’re inside or outside, depending on the type of film look you’re going for. If you’re hoping for more of Kodak or Porta disposable film kind of look, flash is your friend in many cases.

DON’T BE AFRAID OF THE DARK Sometimes:

I know – this sounds like the complete opposite of what I listed above, but before you count it out, hear me out. Another characteristic of some types of film is the low exposure. I remember taking photographs as a kid and teenager on disposable and reusable cameras where depending on the film used, it wasn’t a lot of exposure in the image. That matte, darker look can be achieved on your DSLR camera by not using the flash and by keeping your exposure low when editing your photographs. Instead of increasing the exposure, the brightness or even the white balance, you want to leave them as is or make them lower, depending on the balance of those things in the natural composition of the photograph.

With our MOOD and OUI presets, we did a lot of that for you, among other things, to try to capture that look. If you don’t have a preset, however, sometimes just making those edits can make all of the difference as you see in the photograph above.

The above photographs were taken in a dimly lit restaurant on my iPhone last fall. Believe it or not, I really like these photographs. They aren’t the most flattering (at least of me – look at that facial expression haha), but they’re candids that are a little blurry because they were taken in the middle of one or both of us moving.

Movement in photographs, can give the photograph a bit of a blurry, softer appearance to it. Film photographs aren’t always perfect in composition because you truly only get once chance at a shot. You don’t have the luxury of taking a ton of photographs as you do with a digital camera that has a lot of space on an SD card, so sometimes there may be some photographs that come out a little imperfect or blurry. Blurry photographs on film are some of my favorites because they tell a story and depict life within the film. Sometimes because photographs are just two-dimensional images, it’s easy for the photographs to feel posed or to not really tell a story. A little blur, reminds us that there’s movement and life behind these images. Maybe you’re running to your car or laughing at a friend’s joke over dinner. It tells a story and if there’s one characteristic of film photography that can easily be mimicked it’s that, through movement.

PLAY WITH THE DARKER ELEMENTS OF THE PHOTOGRAPH:

Are you wearing an outfit that has some black in it? Maybe you’re near a background that has some darker colors nearby? I’d recommend taking some photographs that include some of these elements in it, especially if you’re using a preset that describes itself as a film preset. In the photograph above, I edited using one of our presets, but I didn’t have to do anything after that, because the darker elements of the photograph (in this case the window to the car) did some of the work for me. The preset simply enhanced it and gave it the look of a photograph that I took using film when in reality I used my cellphone.

As with all of these suggestions, it depends on the type of film look you’re going for, but sometimes utilizing some of the darker-colored items around you can make it so that when you do add a film preset or make your film-edits to your photograph, it’s a little bit easier to accomplish.

Remember when taking photographs on a disposable or reusable film camera how your finger would accidentally get in the way sometimes and end up in the photo? It’s not necessary, but it ties back into the imperfection of film photography that I mentioned above. Sometimes a little extra accidental blur here or a finger there adds a little bit of something something to the photo that feels reminiscent of the photographs I’d take as a kid and teen.

Those are my tips, but I’d love to hear from you! Also, if you’re interested in shopping our film presets, feel free to shop them below!

A Cup of Kims Presets 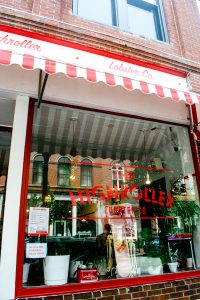 According to Kims: Is High Roller Lobster in Maine Worth the Visit?
During our visit to Maine, one of the places that…