My husband’s from Delaware and we have driven past the Nemours mansion so many times, always saying that we’d love to visit one day. We’d been to the Hagley Museum in Delaware, which is how the DuPonts broke into the American industry by producing gun powder. The mansion, however, focused more on the history of the DuPoints, specifically Alfred Dupont and his accomplishments.

One of the things that struck me the most about this home is how beautiful it looked. It was said that in Alfred’s will, he wanted his wife, Jesse to live in the home until she died and after that wanted it to be opened to the public as it was when they both lived there. If this is anything like they liked when they were both living in the home, I am so impressed by the decor.

The holiday decorations were additions by the foundation because they add them every year around the holidays, but even the stairwell and the foyer and the greenhouse – everything was just so beautiful. I found myself saying that multiple times during our visit and I was impressed by some of the modern inventions they had there.

For example, did you know that they were the first house in Delaware with electricity? Oh, and that he had bowling lanes in his basement?

I felt like I walked into a time capsule back in the 1920s and it was absolutely stunning. Everything reminded me of the rich and famous of the gilded age.

In addition to the accomplishments Alfred had, he was also a big philanthropist. Part of it may have to do with his upbringing because although he was born into a wealthy family, he lived on and worked alongside the mill workers growing up. He played with the millworkers children at the power mill and therefore got to see much more than some of the other DuPonts did, when it comes to how poorer people during that time lived their lives.

Alfred even gave some his own money to start the first pension program in Delaware before social security existed. Him and his wife loved helping others, so there was a children’s hospital built on the property of their home that his wife saw through that it was built.

What’s the best place that you’ve traveled to before? 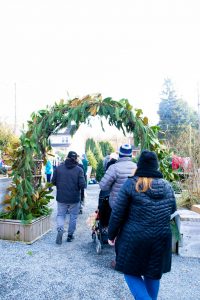 Newlywed Travels: The Holiday Village at Kennett Square Creamery
One thing that I was really looking forward to doing…