When we were driving up towards Portland, one of the first things we noticed after we crossed into Maine were the signs warning us of moose. I remember we both looked at each other and laughed with excitement because as natives of the Delaware Valley, we’ve never been anywhere where moose were so common that they apparently crossed highways.

Naturally, when we visited a gift shop on Commercial Street in Portland, my husband brought up our curiosity about the signs and how common moose sightings were. When inquiring, she shared with us that there was a wildlife reserve nearby where you could not only see moose, but other regional animals as well. So, we drove about 30 or so minutes outside of Portland to Gray, Maine to explore their wildlife reserve.

Being that practically all of the exhibits are outdoors, there wasn’t really a whole lot of restrictions, but there was some signage encouraging guests to be mindful of where they’re walking and their space from others. There were some signs asking that you social distance and wear a mask in crowds and in the indoor exhibits when you first walk in. There was also a sign indicating which side of the exhibits you should walk on to eliminate a lot of foot traffic going in different directions. Some people weren’t really following the signs encouraging people to walk certain paths, but it wasn’t really crowded when we went so it was easy to still distance ourselves and maneuver around people walking the opposite way.

One of the things we both liked about this reserve was that they rescue injured animals and rehabilitate and care for them there. It gave us a different perspective as we walked through the reserve, viewing the animals there. Speaking of the animals, they had quite a nice amount of animals there that they’ve rescued and cared for.

There were deer, eagles, and porcupines. They had skunks, which my husband and I joked that it probably sprayed someone, which was why that part of the exhibit had a “closed temporarily” sign. They even had beavers, which probably sounds so uninteresting to most people, but beavers are one of my favorite animals because they’re so smart and cute! I have not been to a reserve or zoo that’s had them (to my knowledge), so I spent quite a bit of time exclaiming to my husband about its cuteness and pointing out its dam.

The star of the show for us was, of course, the moose. The illustrious and large moose that we’d driven a little over thirty minutes to see. We did get to see the moose, but I couldn’t get good photographs of it since it was pretty far back. Honestly, photographs wouldn’t truly do it justice either way because it doesn’t truly capture how large they are.

Viewing all of the animals and exhibits, I think we spent about 2 hours there, but I think we could’ve spent another hour there exploring their general store and spending more time interacting with the animals.

In short, we definitely recommend if you haven’t already and you’re in the area that you visit the Wildlife Reserve. It’s a wonderful opportunity to learn more about the animals local to the Portland area and to see a few that you may not commonly see near you. It’s a fun experience for a fun date night or an enjoyable day with family. 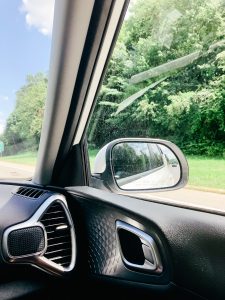 Fresh Pressed Edit/ September 2021
JavaScript is currently disabled in this browser. Reactivate it to…