Despite growing up and currently residing in Pennsylvania, I’ve never actually been to Hershey, PA. I’ve had opportunities to go, but each time I’d decline because, to me, Hershey didn’t seem like it was that grand of a place. I imagined a small town with a small amusement park in the middle. It wasn’t until we drove through Hershey, PA during one of our random drives that I ended up seeing just how sweet (see what I did there? 😉 ) of a place it was.

As we briefly drove through the main street lined with Hershey Kisses, making our way past the restaurants and museums – some themed after the notable company, I realized just how cool this place was. I think it was in that moment that my husband decided that we had to come back here to actually visit and explore the town. So during my birthday weekend, my husband and I spent some time in “The Sweetest Place on Earth.” If you’ve never been, but you’re planning to visit sometime soon, here are some things to keep in mind before you go!

While they’ve recently removed the need for timed tickets, so you can walk up and purchase tickets the same day, you still have to have tickets for each attraction. We recommend purchasing them ahead of time by creating your own bundle as it’s easier and saves you time and money. To create your own bundle, you can go on their website and decide your own “adventure” as they call it. Each package includes different activities you can do or you can go and build your own.

We got the most bang for our buck when we realized what the regular price for the tickets were if we purchased them separately in person as opposed to a set bundle. It’s also nice because we were able to transition through the exhibits without worrying about having to go back and purchase a ticket for the ones we wanted.

Plan Your Visit So The Most Crowded Exhibits are First:

During our visit we had the opportunity of creating our own candy bar, which was a really interesting experience. It was nice being able to see the process for creating our own bar and getting to add the toppings we wanted, but sheesh was it crowded. Despite our timed ticket, we waited around 30 minutes in line to enter the attraction and spend probably another 30 minutes to 45 minutes inside. I don’t say this as a critique against them, but to say that it’s an understandably popular exhibit and now that they are no longer requiring timed tickets, I’d keep that in mind if you want to do it and do it first. If there is an option to do so, that you go earlier in the day to avoid the crowds.

The opposite goes for their free ride attraction near the Reese’s section. We went later in the day and it was pretty much empty, which was really nice because we had a whole car to ourselves and got in with no long lines. When we walked past the exhibit earlier, there was a line of people waiting to get in. It seems for this the later you go, the less people that are there.

With that said, I’d recommend spending some time trying to strategize which places you want to go to first and create your experience based off of that.

Going to The Chocolatier? It May Be a Little Wait:

During our visit, I kept telling my husband how much I wanted to try this restaurant that spoke of having a chocolate-infused BBQ sauce that sounded heavenly. I say it while we were heading towards the trolley and knew I wanted to try it via take-out since we weren’t quite comfortable with eating inside yet. However, we found out upon arrival that you need to reserve a table, but reservations aren’t accepted ahead of time. Meaning, that there might be a little line to enter while there of people waiting for available tables since it’s still new. They also don’t do take-out right now, so if you want to eat there, you’ll probably have to wait. This might change later on since they recently opened in May, but I’d recommend double-checking the website to make sure there aren’t any steps you need to take to dine there.

I’m sure this goes without saying, but I noticed while we were there that some guests were confused. While I’m sure there is a package that exists where you can purchase tickets to Hershey Park and Hershey Chocolate World, you cannot purchase one ticket to get into the other. Each attraction has a separate ticket and even a separate website. I’d keep that in mind when going to make your purchase.

What about you? Have you ever been to Hershey, PA? If so, what are some tips you’d recommend for visiting Chocolate World? 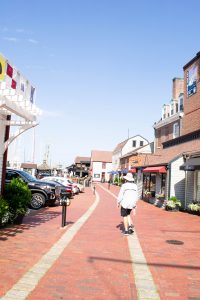 How to Travel Safely This Summer in 2021
So it has officially happened. The travel bug has bitten…