We visited the museum that’s very hard to find – The New York Transit Museum. Today we’re sharing how to get there and what to expect.

The New York Transit Museum is a location in Brooklyn, New York and is one of the coolest museums we’ve visited in the city. It’s also one of the cheapest at a price of $10 per person for the entire museum. For such a price you would expect it to be pretty small, but it’s fairly large and is definitely a museum I would recommend.

Unless you go during a time when there’s a line out around the corner, it can be difficult to find because it isn’t your typical museum. The museum is located underground in a former train station. For that reason, when looking for the museum you want to be looking down instead of up at the buildings. The easiest way to locate it is by looking at the maps and the address where it’s located. We used our Maps app on our phone to help us.

Depending on where you’re coming from, the directions would change, but if you’re coming from Lower Manhattan, the 4 is a fast way to get there. We took the 4 train to Borough Hall and walked about 2 1/2 blocks to the museum that was on Schermerhorn St. All we did was get out, make a right on Joralemon and then walk straight down to Schermerhorn Street. Whew, those street names are a mouth full!

THE TRACKS ARE ACTIVE:

While you should not be anywhere near the tracks because of the way the trains are set on the rails, you are reminded throughout the museum that the train tracks are active. Meaning, those trains are sitting on rails that still have electric currents running through them, so that third rail is one you want to definitely avoid. This should not be an issue though, but if you have kids, you may want to keep an extra eye on them in the area where the tracks are.

GO EARLY OR PLAN TO WAIT IN A LINE:

If you’re able to, I would plan to make the museum one of the first places you visit when arriving to New York City. I would try to arrive a little bit before it opens because although it’s not the easiest to find, lines can form rather quickly because they can only allow a certain amount of people to be in the museum at a certain time. I am sure this is primarily for safety reasons because if you have too many people in there at once it can be hard to enjoy.

We arrived closer to 2pm, so our wait-time was around 20-30 minutes. If you’re okay with the wait, it’s still worth the visit! However, if you’re only in NYC for a couple of hours, you may want to come earlier.

THERE ARE TRAINS FROM VARIOUS DECADES IN NEW YORK CITY:

Want to see what trains looked like in the 60s? What about the 80s? There are actual train cars from those time periods at this museum and it feels very much like a blast from the past. You get to see some of the old advertisements from that time period about everything from processed foods to PSAs encouraging you not to litter (thanks to Etti-Cat). It’s really cool and something that makes the experience that much more enlightening.

While we went without any young children with us and while there are some things you want to be mindful of when going with kids, it is very kid-friendly. There’s this adorable section on the second level where they get to play on a replica of a bus and a trolley, but there’s also an educational center for them to learn more while there.

Have you ever been to this museum? 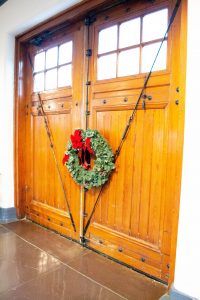 Gift Guide for Your In-Laws When You’re a Newlywed Under $50
When it came to buying a gift for my parents-in-law,…