I‘m not going to lie, when my husband first mentioned this establishment as a place we had to visit during our one-day trip to Portland, I was a little nervous. Perhaps it was residual from everything going on with the pandemic, but up until then, we haven’t really been eating out (with the exception of ordering take out). However, when he told me about the views, the reviews on the food, I thought that if we were going to eat out at least one restaurant rather than doing takeout, we’d choose this one. After trying their seafood, I’m so glad I momentarily stepped out of my comfort zone to try it, and here’s why.

Before I start sharing what we thought about the food, we have to talk about the views. While there is indoor seating with large windows giving you a view of the outdoors, it’s truly the outdoor seating that’s the star of the show. It’s located right next to the water so you get a beautiful view of the ocean beside you as you eat. There’s a rocky surface you can walk on very close by, which many families opted to spend time exploring before and after their meals. It makes for a really scenic and relaxing experience.

One of the things that my husband talked about wanting to try while there was their lobster while I wanted to try their clam cake and clam chowder. The ordering process was pretty quick and easy, which made the process pretty simple. I think we also got there at a pretty good time, which helped us avoid the crowds that formed soon after.

The clam cake was really delicious and had a nice crisp to it. The clam chowder was, as my husband also said, some of the best clam chowders I’ve had so far. It was flavorful and the clam tasted fresh. There were hearty chunks of potatoes in it

My husband said that lobster was very delicious. He said he was sweet and the butter added extra decadence to it (his words, haha!). While I did not sample any of his lobster, it definitely looked like a pretty good size for the price we paid for it. In fact for our entire spread with the lobster, fries, onion rings, clam chowder, and clam cake we paid just about the same as what we paid for our lobster rolls earlier that day. We both couldn’t stop talking about how shocked we were at how reasonable the prices were for lobster and we definitely got our fill.

We can’t recommend the Lobster Shack at Two Lights more if you’re exploring the Portland, ME or Cape Elizabeth area. It’s a short drive away from the most photographed lighthouse in the state (and I believe the country), and has views that makes the entire meal that much better.

What about you? Have you ever been here before? If so, what was your experience like? 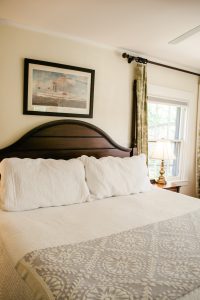 Where to Stay in Newport, Rhode Island – The Marshall Slocum Inn
During our trip to Newport, we stayed in the Marshall…