I grew up in the suburbs of Wilmington, Delaware in New Castle County. I don’t know if I could say it’s a typical American suburb or typical Northeast US suburb because I haven’t been to a majority of either category.

Growing up, we moved a few different times but always within a 20-30 minute drive from the center of the city of Wilmington. I don’t know if this is typical of any kid growing up in the suburbs, but I remember that commiserating with friends about how there was nothing to do there and how we wished we lived somewhere else. I did leave after high school when I joined the US Air Force and lived almost all of my 4 years in the Air Force just outside Omaha, Nebraska. Omaha is a medium-sized city of over 400,000 people where they do offer a considerable amount of arts, culture, restaurants, and things to do for a city its size.

However, it was not so much more to things offer than there are in the Wilmington, DE area. Also, outside the Omaha metro area, it’s miles and miles and miles nothing but cornfields and flat land. Wilmington is 30-40 minutes from Philadelphia, an hour and a half from Baltimore, 2-2 and a half hours from NYC or Washington DC, and about an hour from a number of beach towns and resorts. Awakened by this realization (and maybe partially because I had a couple of friends from Texas who wouldn’t stop talking about Texas), was a newfound pride and appreciation for my home town.

We live not too far from Delaware, which is nice since we have a family that still lives in the first state. Before we got married, we would often visit Delaware to do everything from go shopping (her idea) to experience some new things in the city. Since then, it has become a place that has a soft spot in our hearts and as a result, I’ve become a champion of defending anything related to Delaware. My wife and I frequently debate which is the better state (between Pennsylvania and Delaware), yet she always wants to go to Delaware, so I say I’m winning that debate.

Without further ado, the following are a number of interesting and fun places to go to Wilmington and New Castle County.

The Wilmington area has a deep connection to the Dupont (the chemical company) legacy. The du Pont (I believe that’s the correct spelling, the company is Dupont) family fled France during the French Revolution because they had close ties to the French royal family. They settled in the Wilmington area and started a gun powder business that over the years developed into the Dupont company today. The site of the gun powder mill is now the Hagley Museum and Library. When you visit, you learn some interesting things about the family, their gun powder business, what life was like at the gun powder mill, how gun powder was made, and you can tour the family home. It is also located at the picturesque Brandywine Creek.

The grandchildren (or maybe great-grandchildren?) of the Eleuthere Irenee du Pont who started the gun powder mill also left a significant mark in the area. One of them, Henry du Pont who was a collector of arts and antiques. His mansion is now a museum at Winterthur Museum, Garden & Library. You are able to take a guided tour of the rooms of the mansion and all the collection of art and antiques. The other well known du Pont has his mansion museum in the area called Nemours Mansion and Gardens. That du Pont’s name was Alfred. Near the site of the Mansion is a very reputable children’s hospital called Nemours/Alfred I duPont Hospital for Children. His wife started the hospital but I think it may have been in Alfred’s will or something. I’m pretty sure he had something to do with it. The mansion was a gift to his second wife who passed away not very long after the mansion was built. His third wife was the one who started the hospital.

At Nemours Mansion, you can see nearly all the rooms in the mansion. You learn which rooms they entertained guests inside of, where Mr. and Mrs. DuPont and where their children’s rooms were. There’s a bowling alley in the basement, a billiards/pool and game room, turn of the century rich person’s exercise room. There’s a garage of classic cars. Everything is beautifully decorated and furnished. Both duPont’s were avid horticulturalists with deep interests in botany. If you noticed, both museums have ‘Gardens’ in their title. Winterthur has a larger garden area but both have a large variety of plants and flowers. The grounds on both sites are very beautiful in general. The Nemours Mansion has this fountain that is quite a sight to see along with the gardens.

If you go a little further south on route 9 along the Delaware River from Wilmington, Old New Castle is a well-preserved colonial town with much of original buildings and homes from the 1600s. There are cobblestone streets and brick sidewalks. , It sort of gives you a feeling of going back in time. There’s a restaurant called Jessop’s Tavern that serves colonial-era food. You can visit the old courthouse which is now a museum. You can also visit and see inside some of the original homes. One of our favorite restaurants in the area is located here. It is called Nora Lees French Quarter Bistro. The menu and decor are New Orleans/Cajun/Creole themed. Old New Castle sits right along the Delaware River. There’s a walking path right along the river by a public park. You can see New Jersey on the other side of the river. It’s a pleasant and picturesque stroll.

EXPLORE THE SHOPS AT DOWNTOWN WILMINGTON

Downtown Wilmington had long been in decline in terms of being a dining, shopping, and social destination. It’s been a major center of the banking and credit card industry but after 5 pm, you wouldn’t see a lot of foot traffic.

For a while, the main drag, Market Street just had a lot of discount stores and restaurants and cafes that closed after 5 pm. However, since the beginning of the 2000s, Downtown Wilmington had begun a slow but definitive revitalization. As a champion of my hometown, I’ve been really rooting and hoping hard for a rebirth of downtown.

Today, they have a number of great dining options that are open late. One restaurant was featured on Diners, Drive-Ins, and Dives on the Food Network this past year. It’s called Farmer and the Cow. They specialize in giant, delicious and, juicy burgers. There is a beer garden that is open year-round called Maker’s Alley. There’s also a number of live entertainment venues including The Queen (run by Live Nation), Grand Opera House, The Baby Grand, and The Playhouse (they do Broadway type shows and theater performances).

WALK ALONG THE RIVERFRONT

Downtown extends into Wilmington Riverfront which had been experiencing a revitalization earlier than the immediate downtown area. The riverfront has a walkway along the Christina River. There’s a minor league baseball stadium called Frawley Stadium. It home to the Wilmington Blue Rocks. Every Friday night home game ends in fireworks (literal). There’s a number of reputable restaurants along the Riverwalk. There’s also a Children’s Museum and a movie theater that offers Imax. There’s a free small art gallery exhibit.

These are just a few of things that you can do and see in the Wilmington area. There are many more things to do that I will write about in future posts. If you’re ever in the Greater Philadelphia/Delaware Valley area, be sure to check out Wilmington and the surrounding New Castle County attractions. According to the Wilmington Tourism organization, it’s “In the Middle of it All.” and I would have to agree.

What are your favorite things to do in Wilmington? 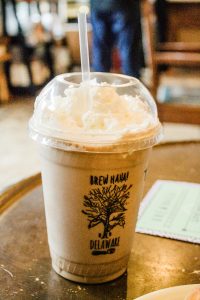 Visiting BrewHaha! in Greenville, Delaware
JavaScript is currently disabled in this browser. Reactivate it to…