When we visited New England last summer, Boston was on our list of places to go back to and explore. Boston is a city that has a special place in our hearts and it’s a place that we’ve already experienced a lot of joyful memories inside of.

While there, we decided to stop by one of the Cheers locations downtown after spending the day exploring the city. We did not get a chance to visit THE location that was featured on the show, but there’s another location they have downtown near the wharf that’s pretty cool as well.

Although it’s not the original location, it picks up on a lot of the nuances and references that you can find in the bar that’s on the show. When walking in you’re immediately greeted by quirky phrases and memorabilia referencing Cheers and cutouts of the cast members. It’s decorated with deep woods and lots of brass accents, also a nod to the original set up of the show. There is a lot of windows in the establishment, which is especially nice when the weather’s nice, like how it was when we were there because they open the windows up so space feels even larger.

The menu was definitely one of the highlights of our experience as it has quite a few options. They sectioned off the menu based on the cast members of the show and I believe even featured dishes that have been featured on the show. I always appreciate when themed restaurants really take the extra step in bringing in references from the show onto the menu.

When we visited, we’d just eaten maybe a couple of hours before, so I was not as hungry as I thought I would be once we sat down. I ordered their spinach artichoke dip while Han ordered this dish that neither of us can recall the name of it, but it was similar to a spaghetti dish. I believe there was garlic, onions, peppers, and some other items in it, but what we do remember about it is that he enjoyed his meal a lot.

It’s honestly hard to mess up spinach artichoke dip, but I think what I love the most about theirs is it was very, very hearty. Nice artichoke chunks, good, creamy consistency in the sauce. Although most wouldn’t consider this a meal, the portion size was large enough and the dip was hearty enough that I was full after finishing my dish.

Have you ever been to Cheers in Boston, MA? What was your experience like? 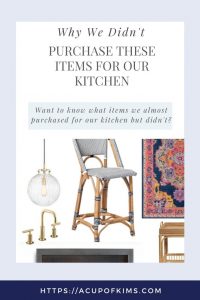 Things We Considered Purchasing for Our Kitchen & Why We Did Not
JavaScript is currently disabled in this browser. Reactivate it to…