If you’re a native of Philadelphia or just been doing some research for an upcoming trip to it, you’re probably familiar with Elfred’s Alley. It’s a pretty popular post in Old City for tourists as it’s a glimpse into what life was like whilst walking the cobblestone street of the alley. Even if you’re a local like us, it’s hard not to be in awe while walking through the alley of its beauty and uniqueness.

While I was well aware of the existence of the alley, I had no idea there was a museum for it until we visited! I am, however, glad that there is a museum that exists for this alley because it gave us a lot more information about the history of the alley than we would have gotten anywhere else.

Many of the Homes Were Owned by Women:

During the war, around one-third of the homes were led by women. As told by one of the historians on-site, these women weren’t going to starve while their husbands were off fighting in a war. They needed to make money and they needed to be able to provide for themselves and their family, thus resulting in them purchasing homes in the alley and starting their own businesses.

This was pretty revolutionary for the time because normally women weren’t even allowed to own homes. I found that to be pretty incredible and inspiring.

Many of These Homes Were Also Stores:

Bouncing off of the previous point, while their spouses were away fighting a war, many of the women living in the alley began opening their own businesses to try to keep an incoming coming into the household.

Even when there was not a war, many of the homes served also as stores for different tradesmen, glassblowers, and furniture builders who also lived on the street.

Call me foolish, but I grew up under the assumption that Elfreth’s Alley was a historically preserved street where many of the homes were just storefronts or there to give the visitor’s an idea of what life was like back then. Well, you can imagine my shock when I learned that people still live there today. While walking down the alley, we saw everything from signs drawn by children that were providing visitors with fun facts about the street to personalized flags. The homes are beautifully maintained and apparently, during certain times of the year, you can go inside some of them.

It’s really fascinating and although I could not imagine living on a street as busy as this one with people constantly snapping pictures of the front of it, I know the residents there are good sports about it as long as you’re respectful of their homes.

What’s something you didn’t know about Elfreth’s Alley? 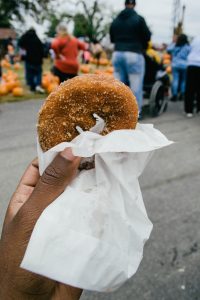