Han’s birthday was in early September and for the past few months, he had been talking about how he wanted to do some touristy things in Philadelphia. As I’m writing this, we are in the tail-end of the fall and I am just now publishing it, haha. #killingit

However, as natives to the city, I would be amiss if I didn’t devote a post to what we did and how we planned our trip.

As someone who was born and raised in the city, I originally thought that there wouldn’t be much more that I haven’t already seen, so for years I rarely ventured into the city to see any historical sites. However, the last time I’ve visited most of these sites I was 10 years old. As much as I’d like to believe my memory is that good, it’s likely that there’s things that I missed during previous tours when I was an easily-distracted 10-year old. Plus, Philadelphia is cool whether you’ve seen something once or ten times. There’s always something new to experience and something new to learn.

For his birthday and also as an opportunity for both of us to really experience all the historical aspects of our city has to offer as adults, we put on our comfortable walking shoes and headed into the Old City section of Philadelphia to explore a bit. To be tourists in the city where we fell in love, lived for quite a few years together, and where I grew up. My forever home in my heart and the place that I’ll always have a soft spot for.

My husband isn’t easily surprised, so while he knew we were going to be doing some exploring in Old City, he didn’t know where we were going because I had everything pre-planned. From our early afternoon activities to our dinner festivities, I pre-planned everything so we could get the most out of our experience while we were down there. Here’s what we did!

The first stop we went on was Elfreth’s Alley. It’s $3 per person, but you get to walk along the cobblestoned streets and explore the different shops and buildings nearby. They’ve been preserved so nicely, so it feels like you’re almost stepping back into that time period. Read this post to check out our photo-story and read this post to find out more about our experience at the museum.

After visiting Elfreth’s Alley, we stopped at the Independence Visitor’s Center to grab some pamphlets and to also grab the tickets I reserved for our tour later that afternoon. We were advised on the website to pick them up at least 45 minutes beforehand, but we figured since we were parking nearby, we might as well stop there first and then head to our other destinations.

I almost forgot to mention this, which is so silly of me because how could I forget a place like this? It’s not his actual house, but it’s where his house once stood. However, it’s not the structure of the house that’s the interesting thing about this site. It’s the fact that this site is now solely there to bring the stories of George Washington’s slaves a lot. I must admit that walking through it was a bit rough because one part allows you to actually see down into the quarters (or what’s left of it) where his slaves lived. However, I do appreciate the fact that they turned into something that brings their stories to life and allows them to be remembered.

Next we went to Carpenter’s Hall to do some exploring. It’s completely free and there were no reservations needed, so we were able to walk up and get some tickets. The hall is definitely one I would recommend checking out as it’s absolutely beautiful, but it can get crowded pretty fast, depending on when you go and how many school groups there are.

The next stop was the Benjamin Franklin Museum is another place we’d recommend. We were in a bit of a rush because we had a timed ticket we had to be there for Independence Hall, but it’s one of the places we said we’d like to go back to so we can really experience. It’s a super interactive museum with opportunities to learn everything from Benjamin Franklin’s pet squirrel to the time he tied a kite to himself as a kid while swimming, so he could swim faster. Whatever new information you learn, you will definitely leave learning that Benji was a very interesting man, who never stopped inventing.

Our last stop was Independence Hall – mainly because by the time I found out that in order to tour the building you have to book a tour, there weren’t many time slots left aside from 4:20 pm. I knew that was somewhere we both really wanted to visit as adults, so I booked that time slot and worked our schedule around that.

This post deserves and will get its own post as there’s so much to discuss our experience here! Such a cool place to go even if you’ve lived in Philly practically all your life.

Dinner was the only thing I didn’t keep secret, because I wanted it to be somewhere I knew he’d actually enjoy. If he wanted to go somewhere new, I wanted it to be a place he was actually interested in trying instead of me trying to guess what he’d be in the mood for. Well, he wanted somewhere we haven’t been before, so we went to Cuba Libre, a Cuban restaurant in Old City.

I cannot speak highly of this place as the food was incredible, the service was great, and the ambiance was very nice. Eating there felt like you were stepping into a different place. Expect a review of this restaurant soon on the blog, because it definitely needs its own post. 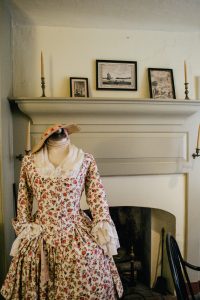