One of my favorite books that I read in high school was The Great Gatsby. I remember falling in love with F. Scott Fitzgerald’s writing, use of symbolism, and the discussions that arose after reading. It was a great book and since then, I’ve enjoyed learning about and visiting mansions straight out of the Gilded Age.

Rosecliff Mansion was not only where they filmed the Robert Redford version of The Great Gatsby, but it’s also a mansion that is so stunning that it doesn’t surprise me why it’s considered one of the “must-see” gilded age mansions.

After you walk through the large, black, doors leading into the foyer of the mansion, you’re greeted by large ceilings and employes welcoming you into the museum. After you get your ticket scanned, you are given headphones and a device that’s playing a listening tour as you walk through the mansion. I’ve never done a tour like that, so I enjoyed being able to walk the museum at my own pace while having the opportunity to rewind if I missed something.

I don’t want to give too much away about what was shared, because I strongly believe that museums like these are better experienced in person where you can see and hear all of the amazing and sometimes humorous things that occurred within the walls of the home. However, I will share some photographs of the mansion and some things I personally liked about the experience.

Rosecliff Was a Summer Home

I don’t know about you, but something that surprised me about this mansion and the other one we visited was that these massive homes weren’t even occupied all year round. I mean, the moment you walk into Rosecliff you are taken aback by how gorgeously decorated it is and how much space it has, but they only stayed in it maybe three weeks out of the year. If their summer homes looked like this, I could only imagine how beautiful their year-round homes looked were.

Maybe I have been living under a proverbial rock, but did you know that Amistad and the Devil Wears Prada was filmed in Rosecliff Mansion? I had no idea and didn’t know this until I saw something in the mansion that alluded to it. Excuse me while I go to watch these films and try to determine which scenes it was featured in.

Many of the Richest Families During that Time Knew Each Other

My husband and are history nerds, who frequently visit museums and historic mansions in just about every stated we’ve been to. One thing that I noticed was there being an immediate connection between just about all of them. The DuPonts in Delaware had family members who were close friends with people from The Vanderbilt family. The Vanderbilt family had connections with The Dukes. It’s just a reminder of really how few rich families their actually were and how often these families traveled.

People Would Sometimes Get Married There

Without giving too much away, I found out while attending the mansion that weddings have also occurred at Rosecliff. Honestly, with how large and beautiful the home is, I could see why! However, I don’t know how many other mansions held weddings of people who weren’t family members in their home, so I found that quite interesting. 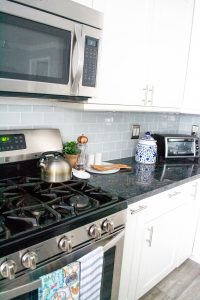 How We Decorated Our Kitchen on a Budget
JavaScript is currently disabled in this browser. Reactivate it to…