“You want to go to a drive-thru safari?”

One day after work, my husband arrived home with a waiver in one hand as he gleefully showed me information about a drive-thru safari in Halifax, PA.I’m not going to lie, when he showed me the waiver, I remember raising my eyebrow in suspicion as I inquired, “why do we need a waiver?”

I mean, what kind of drive-thru safari was this that we needed to sign a waiver for it? Typically when I think of waivers, I think of the one I signed in college when I went bungee jumping at Six Flags that made sure we consented to the fact that if anything went wrong, they weren’t held responsible.

Once I actually read it, I realized that of course, it was mainly referring to the fact that any damage that is done to your car (let’s say from an elk slamming into it), would not be the fault of the safari. Those situations are rare, but I’m sure they have you sign it in the event that it actually does happen so that you don’t approach them with a lawsuit expecting them to pay for any damages done by the animals.

So, we signed the waiver, hopped in the car and headed towards Halifax, which is a little over 30 minutes outside of Harrisburg to head to the safari.

WHAT TO EXPECT WHEN YOU FIRST ARRIVE

When you first get there, you’re asked to sign a waiver, if you haven’t already, and ushered into a lane where it eventually narrows into one. Once you get the map, you’re motioned to slowly go through the drive-thru at the recommended speed. We must’ve gone at a great time because not only were there not that many cars blocking our experience, but when we first entered the drive-thru safari, we got incredibly close to a group of elk right by the road!

WHAT TO EXPECT DURING THE DRIVE-THRU

As much as I’d like to say that you should expect to get really close to animals, that’s not always a given – something they make clear in the map and the paperwork. The animals are frequently moving around the land they have provided for them, so it’s not always certain that you will get up close and personal to the animals there. However, you’ll certainly see a lot of animals that you may not normally have the opportunity to see in an environment where they’re grazing and interacting with each other.

As far as what else to expect, I’d expect to proceed very slowly through the drive-thru. Not only are there sometimes people in front of you who are taking photographs of the animals, but sometimes animals will cross the road, which causes the cars to stop until all of the animals have passed. This happened once during our time there and I’m sure it was quite the sight to see for the people in the car where they crossed in front of.

WHAT WERE THEIR SAFETY PRECAUTIONS?

As I’m writing this, we’re still actively in the middle of a pandemic unfortunately. As a result, there were and may still be some precautions and things that you will be asked to do while there. However, since you’re spending the entire time in your car (unless you’re going to be going to the zoo part of the safari), there isn’t really much you need to do.

All the employees are masked and on the day we went, they wore gloves. They were polite and friendly, but had precautions in place to ensure they and the guests would be safe, even for the short time you’d interact with them. Everything moved efficiently and clearly.

I’d recommend wearing your mask as you’re driving up to the booths where the employees are since you’ll be pretty close to them on the passenger’s side, but other than that, once you’re safely away from them, you are not required to have your mask on and can enjoy the ride.

WOULD YOU RECOMMEND THIS?

We’d absolutely recommend this for anyone looking for something nice to do with family or alone while safely distanced from others, this is something you’ll truly enjoy. They have a nice variety of animals that you can see on a given day and even some snippets of information about them as provided on the map they hand out.

Although we went in August when the weather was warmer, you can definitely go during the fall until they close for the season!

Have you ever been to a drive-thru safari? 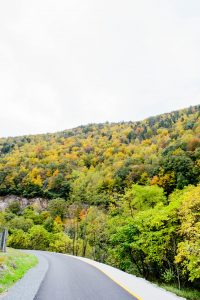 New Fall Page on Our Website for Fall Activities, Finds & Things to Do!
It's no secret that fall is one of my absolute…