Day three was one of my favorite days that we had of the trip because it was the first time for a lot of things for me. Allow me to divulge further.

We started the day trying to determine whether or not we wanted to venture to the beach, but we overheard a few locals talking about the “red tide” and how it’s one of the reasons why they have not gone to the beach in Newport this summer. After doing some research, we learned that there had been a ton of algae that has been washing up on the beach and that if ingested you can get really ill from it, so we opted out. That didn’t stop us from walking near the beach and along the Cliff Walk, though!

After breakfast, we went to the wharf to grab a cup of coffee and to reserve our tickets to go sailing. Yes, neither of us can swim, but my husband really wanted to go and I felt that this would be something I’d end up enjoying if I just gave it try. Plus, sailing is one of the things to do in Newport and I’d be amiss if we left there without at least trying it.

After booking our tickets, we went to the aquarium at Easton’s Beach, which was really informative and nice. It’s a small aquarium, but you get a lot of informative from the workers there and you get to even touch a few sea animals. Once we left the aquarium we did about thirty or so minutes of walking along Cliff Walk, taking photographs of the bay and the ocean whilst pointing out flowers, butterflies, and the waves crashing against the rocky terrain. We also saw a bunch of signs like this one warning people to be careful when walking it. It made seeing this t-shirt a little later in the day a lot funnier.

For lunch we visited Mission for burgers and they were really delicious. I was very happy with the burgers we got and their special sauce was really delicious. I got some on the side for us to dip with. We’ll be sharing a post later on with our opinions of the place a little later.

Once we ate our fill of burgers and fries, we went for a short drive around Newport, before heading back to the room to begin getting ready for the boat ride. I was planning to wear the same thing I wore all day, but I figured that it would be a bit cooler on the water since it was almost evening when we went, so I opted to wear my Vineyard Vines hoodie, shorts, and loafers. For pretty much the entire duration of this trip, I was focused on comfort because I knew we would be walking a lot in the humidity and heat.

This was my first time sailing and it was such a pleasant experience! I’m glad that I stepped outside of my comfort zone and did something I normally wouldn’t do because I really enjoyed it. It was $40 per person, but it included a beer tasting, a 1.5-hour ride, and commentary about the different sites along the coast we were passing as we sailed. We’re planning on sharing a bit more in the future about the boat we sailed on and why we loved it in a later post.

After we sailed and cooled off, we decided to walk a bit more along the streets of Newport, looking at the different restaurants and smaller stores along the street before grabbing dinner at Griswold’s where I got the taco salad.

Overall, I would say it was a day well spent and gave us the opportunity to explore the city and it’s coast a little more than the day before. 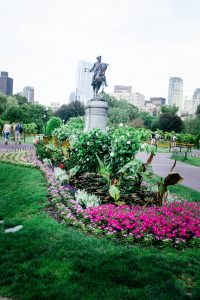