For the sake of time, we’re putting the rest of our activities from our trip to Newport, Rhode Island in one post.

On Day Four we started our day after breakfast with a cup of coffee from Meg’s Aussie Milk Bar. I was really excited to try it because I heard good reviews and because they sell authentic Australian food. We never managed to try any Australian food there because we were so full after breakfast, but one of these days if we’re able to make it back up there, I want to try an Australian meat pie.

After grabbing a cup of coffee, we decided that we would go to the Audrain Automobile Museum. It’s one of two car museums in the Newport area, but it has some of the most beautiful, antique cars I’ve seen and they have been kept in superb condition. In fact, there are a few videos of people riding some of the carts that have been on display in our modern day. This museum swaps out cars and has over 200 that they have, changing them up based on the season and displays.

We grabbed donuts from Liberty Donuts – a place we had been really wanting to try and my goodness were those donuts amazing. They were warm, crispy, and so delicious! My husband got the Boston Creme donut, while I opted to get the PB&J one.

Now that we were pretty full off of donuts, we decided to venture a little bit out of Newport to the surrounding towns of Bristol and to the Audobon Bird Museum. We were sort of familiar with the museum and sanctuary as we’d seen references to it made in the Rosecliff mansion exhibit, but visiting it was an experience we’ll never forget. There were live turkeys just hanging around because it is a wildlife reserve. I had never seen a live turkey before and neither had my husband, so we joked that it must have been meant for us to go when we did because when we left they were nowhere to be found.

After that, we spent some time walking around and exploring the Newport History Museum, which was pretty informative. There’s no fee, but donations are appreciated, and you can learn a lot about Newport’s history and how it became the tourist resort town that it is today. They even share with you some information about the construction of the Clairborne Pell bridge that connects Jamestown to Newport, Rhode Island.

They also had a really nice gift shop connected to the Newport History Museum that I was tempted to purchase so many things from, including this pastel pink print that had a map of the US on it with each capital’s landmark that they’re known for. I couldn’t figure out where I’d place it, so I opted not to, but I would be surprised if no one else got it.

For dinner, we went to Flo’s Clam Shack where I had the calamari meal and my husband had the fish with french fries. Everything about that meal was so delicious and honestly one of the best seafood meals I’ve had in a while. The calamari was fresh and with a little lemon squeezed ontop it really brings out all of the flavors in the seasoning. Also, the fries were incredible. We can’t wait to share more about that in a future post!

Day five was a hard one because it began to sink in that it was our last day in Newport, RI. It was such a relaxing trip and I am really thankful we were able to go on it together after some unexpected events of the last year. It was really nice to be able to spend time together, explore one of our favorite regions in the US and just relax without worry. I made several half jokes about saving money and selling the house in several years to use the money to buy a house in Newport, RI. I don’t think either of us sees ourselves moving in the near future, but it was so laid back and beautiful up there that we could both see why people love the area so much.

My husband really wanted to go to Providence because it was so close to Newport and had a restaurant that had one of the best hot dogs in Rhode Island. So, we grabbed a coffee to go and headed to Providence to explore the area. After determining a plan of action over coffee, we walked around Brown University’s campus to visit their Athenaeum, which was really cool, and to see some of the colonial and Victorian-style homes in the area. Also, it is a book lover’s dream. Everything was organized by time period, name, and genre.

For lunch, we went to Olneyville Systems New York Hot Dog (a mouthful for sure) and it was probably one of the best hot dogs I’ve had. We got the two hot dog special with everything on it and they were amazing. My husband heard about this place on Diners, Drive-Ins, and Dives and I am glad that he did. It’s a simple, no-frills kind of place, but we both liked that very much. It made it very homey and comfortable. Not to mention, we got to hear a lot of authentic New England accents, which for the accent-lovers in us was equally as enjoyable.

After we drove around Federal Hill, Falls River, and Bristol a bit, we headed back to Newport, Rhode Island where we walked around some more, enjoyed the views of the Wharf once more, before stopping into some gift shops. I really wanted to go home with something remember Newport by since it was such a beautiful place. Needless to say, I didn’t really find anything that I knew I would be able to hang up in our home, but I did manage to get a blue dish towel with iconic Newport landmarks on them. It’s going to be one of the display towels that I put out for decoration only and not for actually drying towels. I know, I’m weird. I hang these towels out over the handle of the oven and have one for every season. Super weird.

Anyway, after that, we grabbed dinner at Griswold’s again and went back to our hotel for the evening and getting ready for our early day the next morning.

This doesn’t really count since it was more of a full day of driving than anything else, but we did manage to make a pit stop to Watch Hill, which was pretty cool. As you may know, Taylor Swift has a home in Watch Hill and I jokingly told my husband that we should try to find it so that I could find the sign where she used a song lyric to make a joke about fans showing up near her beach house. Then I thought that would be creepy and as much as I’d love to be able to point up and say, “that’s Taylor Swift’s house” I cannot deny that I felt like it would be a little bit of an invasion of privacy.

We did drive past several stunning hotels and homes, however, which had us both like “can you imagine living in a house that large?” and “is this huge home only a summer house?”

This continued until we found this beautiful cliff with a small beach that you could park and view the waves at. It was really beautiful and definitely a nice way to make our way back down to Pennsylvania. 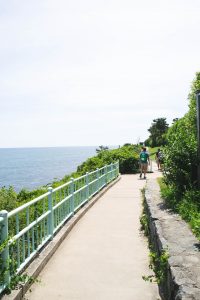