Disclaimer: Tru-Color Bandaids sent me their product in exchange for an unbiased review of their products, which are available at Target! As with all sponsored posts, the opinions featured in this post are my own and feature products that I love and believe you will, too. Thank you for supporting A Cup of Kims and thank you, Tru-Color Bandaids!

Growing up as a child there were very few people who looked like me that society regarded as beautiful. There was and to some degree still is, a very narrow definition of what or who is considered beautiful based on societal standards, but back then it was a lot worse.

I remember struggling with feeling beautiful in my skin because whenever I saw people depicted like me in the media, we were the “unattractive” friend with unattractive personality traits.

Even when it came to toys, it seemed that the prettier dolls were always lighter, because more time was spent trying to find shades that flattered their tones. When it came to dolls of deeper shades, they had bright pink lipstick slapped onto their lips with bright blue eyeshadow.

It’s hard as a child not to see those images and internalize that as you lacking beauty and not fitting into the image of perfect society perpetuated in the media.

The same thing happened when I realized as a college student that bandaids, leggings, shoes, and makeup were all advertised for the same color, but advertised as nude or natural.

“Wait, nude is supposed to match your natural skin tone?”

It wasn’t too soon after that I felt a deep pang in my stomach as I realized that what was being internalized in more ways than one is that my complexion was not only not beautiful, but it was not normal. It was not neutral. It was exotic and maybe even to some – weird and ugly.

Oh, and don’t get me started on how hard it was to find a nude lipstick, nude shoe, or nude scar tissue bandage that fit my complexion.

What people need to realize is that young people see this and they internalize these things. When a company fails to put our products that represent the various shades we come as people come in, we are communicating to people of those ethnicities that they don’t matter.

When a company fails to celebrate the various shades that we all come in, we’re teaching our youth that unless you look like a certain standard of beauty, you are not beautiful. You are not worthy of more than one shade of lipstick let alone stockings that are actually nude.

Beauty comes in all shades and colors. Whether you are fair-skinned or whether you are darker complected, you should feel represented. You should be able to find products that fit your skin tone when you’re looking for makeup or stockings or first-aid supplies.

This is why I was honestly so excited to find out about Tru-Color Bandages, a company that encourages diversity in color through their bandaids. My heart actually fluttered the first time I saw a post from them on Twitter and began seeing their products in Target. I couldn’t help but think how many people – especially young kids, are going to grow up feeling a lot more confident in their complexions and how God made them to be.

For many this may seem like such an insignificant thing, but for a while I had no idea that bandaids were supposed to match your flesh tones. Bandaids are supposed to hide your scars or cuts – not just cover them so they heal. I grew up thinking that “nude” was simply a shade and not something that’s supposed to blend in with our skin tones.

How validating is it to be able to go to a store and find bandaids that fit your skin tone?

How encouraging is it to see people that look like you, wearing bandaids in tones that actually blend in so well that you can barely see it?

The background story as to how Tru-Color Bandages got started is even more inspiring.

“On September 24, 2013, adoptive father Toby Meisenheimer was putting a bandage on his son Kai’s forehead when he noticed for the first time that bandages were made to match only lighter skin tones. Why was this? Kai was already starting to ask questions about why his skin didn’t match his mom’s or his dad’s… Would this be another thing he would eventually notice that would make him feel unmatched and out of place? Were Kai’s only alternatives a Star Wars bandage, or a “clear” bandage (with a white gauze square that doesn’t effectively contain the wound)? Toby and his wife, Murphy, wanted their 6 kids to grow up in a world that provided more options in bandages. Options that validate their equality and celebrate their individuality.

A bandage was and is a small, tangible way to show care, conceal a hurt, and begin the restorative healing process. From the individual with a papercut to our human race, we are confident that healing is possible and that it happens in these moments and small decisions. At Tru-Colour Bandages, we believe the world is ready for a product that celebrates the value of each person through diversity in healing. We hope you do too and that you’ll consider purchasing bandages from the little company that wants to make them just for you.”

I personally find it to be so beautiful that they created these bandaids to help their children and many others feel celebrated and valued, regardless of their skin complexion. That there will be a generation of kids growing up feeling beautiful in their skin because of inclusive companies such as this one.

WHAT ABOUT THE QUALITY OF THE BANDAIDS?

I wore the bandaids every day for the time that we were on vacation, of course removing the bandaid at the end of the day. Like, every day.  In fact, during my recaps of the places we went to, I am wearing a bandaid in pretty much every picture. I’d be curious to see if you can spot it because as I said above, depending on the lighting, it looks almost identical to my skin complexion.

I did this because I wanted to make sure when sharing this review that I was being 100% honest and that I could really test how well these bandaids work. A bandaid that I can wear after washing my hands in the bathroom and chowing down on a burger at a local restaurant is one that I can definitely stand behind, because no one likes a used bandaid in their meal.

As far as the quality of the bandaids, I really like them! The fabric on the band is really soft and hides the gauze well. It’s flexible, so it doesn’t irritate your skin or feel itchy. While wearing it, I found that often times I forgot that I had it on my wrist because it felt so comfortable!

These bandaids do an excellent job at staying put, which is impressive given that I placed my bandaid on an area of my body that I move a lot – my wrist. I frequently talk with my hands and that it’d be a good place to test the durability of the bandaids.

WHAT ABOUT THE SHADES?

There are three shades, currently included in the Tru-Color brand, but I imagine that one day they may have plans to expand their shades. However, I think with the three shades they have they do a good job at representing a number of shades that normally aren’t seen in bandaid companies.

Honestly, in certain lightings, I could either be a medium shade or a darker shade, so there were some lighting settings where I could definitely tell there was a bandaid there and others were it looked almost identical to my skin.

However, I think the point of the bandaids is less that it will be a 100% match and more so that it will provide alternative bandaid shades to represent people like myself who have more melanin as opposed to the pale tan most bandaids come in.

Other than the technical benefits of the bandaids, I am really inspired and impressed with the purpose behind them and I am so excited to see the ways that this company is going to help all feel beautiful in their skin.

If you would like to purchase Tru-Color, they’re available online but they are also available at Target!

Growing up, did you feel represented? If so, in what ways and if not, why not? What do you think of Tru-Color Bandages? 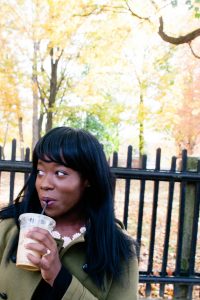