Disclaimer: This post was written before ‘Rona so some of these tips may be inapplicable at the time you are reading this. However, if you’re planning to travel there safely now that some restrictions have lifted (while following the guidelines of course), some of these may be helpful to you!

So, my husband and I went to Newport, Rhode Island for vacation last summer because it was one of the places we traveled through when heading back from Provincetown a couple of Novembers ago. We were both so impressed with how scenic and how beautiful the place looked, and both said we wanted to try to come up here when it was warmer to see what Newport had to offer. Plus, after going on a Kennedy sight-seeing spree, we found out that JFK had some roots in Newport, RI as his family would frequently vacation here. #historynerds

However, we learned REAL quick that Newport is expensive. Like more expensive than we realized and more than we anticipated. Like, “we’re not in Kansas anymore” expensive.

I guess there’s a reason why there’s all sorts of videos and articles talking about it being one of the places with the richest places in the United States.

As much as we love to travel, we’re all about traveling on a budget and to places where we can save money. It’s one of the reasons why when traveling, we tend to stick to places that are within a drive a way, but we learned this go ‘round that just because it’s not that far away, doesn’t mean it comes cheap. Therefore, we also learned quickly that we needed to be smart about this trip.

When in the midst of planning and visiting, we learned that there are quite a few ways to see the beautiful sights in Newport, RI without emptying your pockets, completely of all resources. This is why today we’re sharing with you some of the best ways to save money when traveling to the coastal beauty that is Newport, RI.

I would begin booking your hotel as soon as the summer schedule because available in January. A lot of hotels and inns offer deals for booking it early and will even give you a discount for doing so. The closer you book to the date the less likely it is that you will find a spot let alone find a spot that won’t cost you an arm and a leg.

STAY AT INNS & AIRBNBS INSTEAD OF HOTELS:

If you don’t have a hotel rewards plan, I’d highly recommend staying at a home-stay or an inn. Typically they are a bit cheaper and have cute amenities such as free breakfast or in the case of AirBnbs a host that can recommend the cheapest and best eats for your stay.

PLAN YOUR EXPERIENCES AHEAD OF TIME:

While I love being spontaneous from time to time, the truth is when you’re going somewhere where things tend to be a bit pricey, you will end up spending a lot of money if you are not careful. You should enjoy the place you’re visiting, but I would be wise and try to budget what you’re doing each day so that you don’t end up going over your spending budget.

For example, when we went to Connecticut, we set a budget by planning out what we really wanted to do and prioritizing that. With Newport, we did something similar where we looked at everything there was to do there, prioritized how we really wanted to spend our time and the sights we didn’t want to leave Newport without seeing and went from there. This kept us from not only overspending, but allowed us to get the most of our trip while there.

For fun, we left some room for more spontaneous things, but when it came to what stores we shopped at, what sights we visited and where we ate, we tried to stick to certain places that we’d looked over before our trip.

LOOK AT PRICES AHEAD OF TIME:

Bouncing off the previous point, I recommend looking at prices for everything from restaurants to experiences before actually going. There’s nothing like going into a restaurant and realizing after you sat down that you can’t really afford anything on the menu so you end up getting appetizers for $15. This may or may not have happened to us a couple of times.

Now, when we decide on places to go, we look at the menu and decide from there. It helps with keeping to the budget, but also helps because you get to decide what you want to eat before you get there, which can limit overspending or the temptation to buy something just because.

As far as experiences, by looking at the prices first, you can get an idea of whether the sail-boating experience you wanted to do is worth the price.

GO WHERE THE LOCALS GO:

Something I learned from our last trip to Connecticut that’s a sure way to get the most bang for your buck when you’re looking to save money is to go where locals are going. Yes, Newport is a pretty affluent area, but nine times out of time, the places locals are frequenting or would recommend aren’t always your fanciest schmanciest restaurants. Often times they are inexpensive or moderately-priced options where the food is delicious so they go more often than they might go to an upscale restaurant.

For example, there was one coffee shop I kept hearing about being not only amazingly priced, but really quaint and good. So, we made a point to make sure we went to that coffee shop at least once (or three times 😉 ) for pick me ups in the morning and we weren’t disappointed.

If you’re staying in a home-stay, ask your host what places they’d recommend.

If not, scan the web for some places that locals are talking about as being their favorite places to eat based on the cuisine. Even if you notice most are recommending more moderately to splurge-priced restaurants, you know it’s worth it if a lot of people are saying the same things about it. The locals will never steer you wrong.

LOOK AT REVIEWS BEFORE MAKING A SPLURGE:

Some things are worth splurging on for sure when you think about the experience you’re going to have. For example, we really wanted to dine at this restaurant that has the best view of the bridge and the ocean, so we decided that would be our “splurge” item. However, this wasn’t without looking around at reviews, pictures and travel guides sharing their opinions on this place. Before making that splurge or deciding on places to go, I’d definitely recommend going on Yelp or Trip Advisor to see if it’s even worth spending for.

REMEMBER, YOU DO NOT HAVE TO SEE EVERYTHING THIS GO ‘ROUND:

A mistake I’ve made previously is feeling like I absolutely need to see everything there is to offer at a place because we may never see it again. Well, one easy way to overspend is to have the mindset like this. While yes, you may not get to see some of these places this trip, it doesn’t mean you may never get a chance to go there again. Even if it’s a couple of years from now, you may find yourself back on the sandy beaches of Newport and remember you really wanted to visit a certain restaurant or stay in a particular hotel.

I think I also had to realize that maybe it’s not meant for me to experience something. I remember seeing a hotel that was priced at $800 a night… A NIGHT, Y’ALL! Now, times that by six and you could see why we backed out so quickly when we found that out.

I don’t know if that’s feasible for you, but we sure couldn’t afford that. So, as much as I loved the idea of having scenic views of the ocean, a private entrance, and a jacuzzi, I knew that there’s no way in this economy or at this time that I could afford that, right now – especially for a potential six-night stay. Nope. Nope.

We set a budget for “treat money” meaning items that while browsing the stores along the Wharf, we could get. However, anything beyond that budget, wouldn’t be affordable for us, so we set it and tried to stick to it as much as possible. This “treat money” included any souvenirs or things for the house or clothing items, we wanted to grab. Like I know two things I really wanted, if we could afford it was a KJP bracelet because they’re so simple and pretty, and some sort of souvenir to have for a home. We couldn’t really afford the bracelet and the souvenir, so I got the souvenir instead since I knew I could always purchase a KJP bracelet online at a later time. Whether it was a plate we could place on the wall or a printable or a fridge magnet, we wanted to do something, so that was included in the overall budget.

I also wanted to dine inside of the Castle Hill Inn, but I knew we could not afford those prices if we wanted to do other things this trip. Maybe next time!

DON’T BUDGET TREATS IF YOU CANNOT AFFORD IT:

Bouncing off the previous statement, sometimes you cannot afford to treat yourself while there. There have been quite a few places we’ve gone to that we didn’t go home with a souvenir because we couldn’t afford it. We’ve gone to Annapolis so many times and each time I say that I want to grab something to take home and don’t because we didn’t have it and that’s okay. It made more sense for us at the time to spend on experiences instead of keepsakes, so maybe that is something you’d want to do in Newport.

CONSIDER GOING DURING THE OFF-SEASON:

While I am sure Newport is best experienced during the summer, there are ways to experience Newport during the cooler months as well. I mean, people live there year ‘round so there have to be some stores and restaurants open during the winter – right?

Hotels and even certain attractions tend to be cheaper during the cooler months because it’s off-season and it’s less likely that someone would like to venture up to a town that’s nearly surrounded by water during the colder months. One of the reasons why we were able to afford Provincetown in Cape Cod was because we went in November, which meant we got not only a cheaper Airbnb rate, but everything else was cheaper since it wasn’t peak season. I am sure if we tried going during the summer, we’d be paying close to what we paid for our stay in Newport, RI.

Although Newport is expensive, there are ways to enjoy it and experience it within your means. Whether it means going during an offseason, budgeting your “treats” or staying in an inn instead of a hotel, there are ways to cut costs during the planning process of your trip.

If you want to know some other ways you can save money, not just when traveling to Newport, but when planning any trip, feel free to download our free e-guide disclosing how we’ve saved money during the planning processes of our trips! 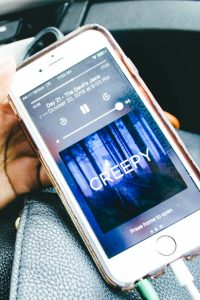